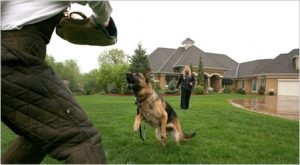 tive protection dog.” This 3-year-old German shepherd, who commutes by private jet between a Minnesota estate and a home in Arizona, belongs to a canine caste that combines exalted pedigree, child-friendly cuddliness and arm-lacerating ferocity.

Julia and her ilk have some of the same tracking and fighting skills as the dogs used in elite military units like Navy Seal Team 6, which took a dog on its successful raid of Osama bin Laden’s compound in Pakistan. In fact, Julia was sold by a trainer, Harrison Prather, who used to supply dogs to Seal Team 6 and the British special forces. But then Mr. Prather switched to a more lucrative market.

“Either rich people discovered me or I discovered them — I can’t remember which happened first,” said Mr. Prather, the president of Harrison K-9* in Aiken, S.C.
He and others in the high-end dog training business say prices have shot up thanks to the growing number of wealthy people around the world who like the security — and status — provided by a dog with the right credentials. Moguls and celebrities now routinely pay $40,000 to $60,000 for a well-bred German shepherd that is certified as an expert in the sport of Schutzhund, which means “protection dog.” The price can go much higher if a dog does well at an international championship, as Julia did.

“She’s a top deal,” Julia’s owner, John Johnson, said as she escorted him around the grounds of his 15-acre estate outside Minneapolis. “She’s won awards. She looks at you, she’s got the most beautiful face.” 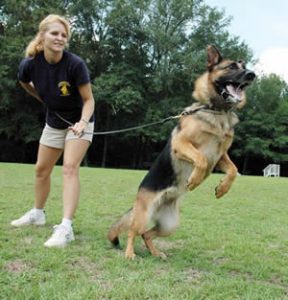 “It’s a lot of money,” he said matter-of-factly. “It’s the speed, the smartness, the quickness — and you would not believe the roughness that she has inside. She’s like a little pit bull when she bites. She has that model face, and then opens the gums up and lets you have it.”

Mr. Johnson said he got his first protection dog after receiving personal threats while he was running the Northland Group, a debt-collection company in Minnesota that he founded and eventually sold three years ago. Now he has six protection dogs, all German shepherds, and normally takes a couple in his car whenever he goes out.

“It’s for both security and companionship,” he said as Julia nuzzled his leg, looking like a gentle enough companion. But when an intruder emerged near the tennis court of his estate, all it took was one command, “Packen!” (the bite command from the German word for “seize”), to send Julia racing across the lawn.

She sunk her teeth into the intruder’s arm, which was encased in padding for a demonstration, and hung on even as he lifted her off the ground in a vain attempt to shake free of her. She let go only upon being commanded and then stood guard over her new prisoner, barking and threatening to bite again whenever he made a move to escape, which he wisely did not try.
Julia’s was a controlled ferocity, which trainers distinguish from the anger manifested by ordinary dogs. When two dogs try to intimidate each other, they stiffen, growl, bare their teeth and stare intently. Protection dogs are trained to continue looking around and protecting their owners, not establish their own dominance. And, when commanded, they are supposed to switch instantly from attack mode to pet mode.

“The dog has to get along with children,” Mr. Prather said. “The client is often a guy on his second family. He travels a lot, leaves his wife alone with the kids in a large house — maybe 30,000 square feet, so big you don’t even know what’s going on at the other side of the house. He wants peace of mind and a dog that his wife can handle. We don’t sell tank-stoppers.”

The price tag for a protection dog has risen because of increasing demand in the United States, Latin America (especially Mexico), the Middle East, Asia and other places, said Mr. Prather and Wayne Curry, the owner of Kraftwerk K9 in Rochester, Wash. 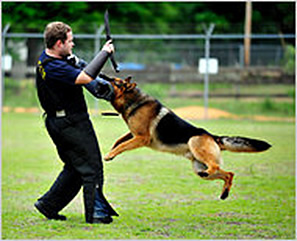 A Harrison K-9®* is a companion even the youngest member of your family can enjoy
“I’ve turned down offers of more than $200,000 for one of my champion dogs,” said Mr. Curry, who added that he knew of a dog that had sold for more than $400,000 because of its bloodline and breeding potential. (Although Julia’s offspring most likely would have commanded top prices, Mr. Johnson said he had no time to breed her and instead had her spayed shortly after buying her in January.)

To clients who can afford the $50,000 price for a typical well-credentialed dog, there are lots of ways to rationalize the price. “When you compare the costs of a full-time bodyguard versus a dog, the dog makes a lot of sense,” Mr. Curry said. “And the dog, unlike the bodyguard, can’t be bought off.”

Mr. Prather said one client, a well-known entertainer, came to him after first trying to ward off a stalker by hiring bodyguards.

“The stalker stabbed one of the bodyguards, got out of jail and started showing up again,” Mr. Prather said. “Then they got a canine, and they haven’t seen the stalker since. People just have an innate fear of animals with sharp teeth. We don’t want to be on the menu.”

Mr. Prather’s dogs are trained for three years in Germany before they go to South Carolina, where they receive further training and are put to the test of family living. Before her sale, Julia lived for four months in the home of November Holley, the company’s vice president and head trainer.

“I’ve probably trained a thousand dogs, and she’s the best I’ve ever seen,” Ms. Holley said. “The total package. Did absolutely everything you wanted, no questions asked. Good with kids, good with horses, good with cats. A perfect lady in the home.”

Julia also proved her mettle as a babysitter, Ms. Holley added. “If my daughter Kailee was outside in the woods, I’d say, ‘Julia, where’s Kailee?’, and she’d go out and find her. She was like a person.”

At her new home in Minnesota, Julia has a part-time trainer, Jeremy Norton, who also works as a firefighter in Minneapolis. Mr. Norton agreed that Julia was a special dog, but he smiled a bit uncomfortably when asked to explain the $230,000 price.

“It’s in the eye of the beholder,” he said. “That’s as politic an answer as I can muster. I mean, Julia’s nice, but that’s half my house. There’s no way to wrap your head around that.”

A version of this article appeared in print on June 12, 2011, on page A1 of the New York edition with the headline: For the Executive With Everything, a $230,000 Dog to Protect It.