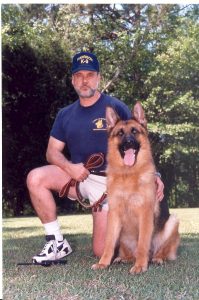 People are becoming increasingly aware that security systems in a home are limited. Dialing 911 or activating an alarm isn’t always the answer, because there is often so much time involved. All too often, people pay little if any attention to car or home alarms when they go off, because there is a conditioned response these days that some electronic glitch has set them off, like when you hear a car alarm beeping.

Many people are now turning to protection dogs as a better alternative to alarms and “911” calls.

Just what is a protection dog? Or, as Harrison Prather calls the dogs he trains at his 25-acre facility in Aiken, South Carolina, “executive protection dogs.”

Think,if you will, of Rin Tin Tin, the heroic German Shepherd of the silver screen. Smart, loyal, affectionate, and obedient, but a most fearsome foe of the Hollywood “bad guy.” That’s exactly the kind of shepherds that Prather produces at Harrison K-9* , considered number one in this business. When an intruder enters your home or a mugger is in your face, a trained protection dog is a much better alternative to an alarm or a “911” call.

Prather says that there is a big difference between his dogs and the shepherds we have come to know as “attack dogs,” like the dogs once used by the military. Those “attack dogs” – also called sentry dogs – were, plain and simple, killer dogs that would never make good pets, according to Prather. “They couldn’t be socialized and it wouldn’t be safe to keep them in a home environment.”

In the 1960s, however, the military switched to what is referred to as patrol dogs, “social” dogs that can be around people, that you can play with in the yard, dogs that you would be comfortable with in your home. “Patrol dogs are trained for tasks like sniffing out drugs and explosives, tracking, and scouting,” Prather said. “They can be trained to bite and hold, but they remain calm unless they, or their handlers, are threatened. This is the type of dog we produce, a social dog that makes a good family pet but which is taught to defend its handler and its handlers’ family and loved ones with amazing ferocity and courage.”

Prather himself was in the military when he first became interested in patrol dogs. “When I got out of the military 28 years ago, I had a college education, but I didn’t want to go out and get a coat-and-tie job. I’d had some exposure to this type of dog, and that spawned my interest.”

He actually paid $10,000 to go to work for the civilian designer who had helped implement the military’s patrol dog program.

After 18 months apprenticeship with this expert, Prather knew how to train these dogs and where to find the world’s best German Shepherds, dogs perfectly suited for this kind of work.

“Because of careless over-breeding, American German Shepherds are genetic rejects,” explains Prather, whose worldwide clientele includes movie stars, professional athletes, government leaders and top corporate executives. “The shepherds we get are born and bred in Europe. They’re from the best bloodlines, and they attend the finest obedience schools before they come to us to be trained as executive protection dogs.”

When a Harrison K-9* European German Shepherd graduates from Prather’s training facility, the dog can obey commands given in four languages. It is trained in a variety of tasks that range from completely searching your house or office before you go in, never flinching at the sound of gunfire, avoiding poisoned food, and clamping down on an intruder’s leg or arm – using 1,200 pounds of pressure per square inch in the process. If one of these shepherds bites an intruder’s limb, that intruder is not likely to use the limb again, says Prather, who is always personally involved in training each of these exceptional shepherds. “I am the guy who gets bit,” he says.

“On and off the leash, these dogs are absolutely obedient”, says Prather. When given the “Watch” command, the dog will keep an intruder at bay by snapping and barking in front of the handler. Should the intruder attack, the dog will protect his handler with or without command.

“But if you command your dog to remain calm at your side,” he says, “the dog will not act aggressively, no matter how much it is agitated. This training allows the handler to communicate to the dog exactly who is good and who isn’t. Ninety-eight percent of our clients have small children. These animals are very loving with the children, yet very protective of them.”

Like the Hollywood Rin Tin Tin, these dogs are also courageous. They will leave the handler whenever commanded and engage an assailant, even over a long distance and even though the assailant might be armed and aggressively approaching the handler.

Harrison K-9 ‘s* German Shepherds are bred in Germany, the Republic of Czechoslovakia, and the Netherlands, and they are what Prather classifies as modified Schutzhund dogs. Schutzhund is a type of training that literally means “protection dog” in German. By the time these shepherds get to Prather’s training facility, the obedience training sessions they have received in Europe have already determined that they have the agility, the intelligence and the temperament for this kind of work.

Once they arrive at Harrison K-9 ‘s* South Carolina training facility, they receive three months of rigorous security training in real-life situations, in simulated park, office and home settings. This type of training teaches the dogs to be courageous rather than aggressive.

“Poorly trained dogs will bite out of fear,” Prather explains. “We train the dogs with positive reinforcement and thereby build their self-confidence. The dogs we train bite out of a conditioned response, not out of fear or aggression.” A Harrison K-9* shepherd is trained to bite only on command, even if it is provoked.

It can be trained to enter your home or office before you go in, to search the premises. The dog will either come back to let you know all is okay, or it will bite and hold an intruder.

Harrison K-9* , which employs a staff of 10, can also provide custom training to teach a dog to track, in order to find a lost child or a companion. They can also custom train a dog to handle some of today’s unique situations, like carjacking.

When your dog is trained and ready you can opt to receive your personal instructions in care and handling either at Harrison K-9 ‘s* facility or at your own home. Every client gets a videotape copy of the care and handling training they receive, and the company also offers periodic refresher training.

The company has been written up in a wide array of publications and has been featured on an assortment of television programs, including Fox Network. The business has grown at a pace of anywhere from 25 to 40 percent in the past several years. But Prather doesn’t want to grow it much more. “We provide very personalized service.” he says. “We take the time to do it right, and we operate on the service principle. I wouldn’t want to get so big that we lose all that.”

But when you consider the peace and security involved for you and your loved ones, those prices seem like a pittance. Says Prather, “These dogs love you more than you love yourself, and they would gladly lay down their lives for you.”