A Lover and a Fighter
Protect your home, play with the children, & provide countless hours of companionship 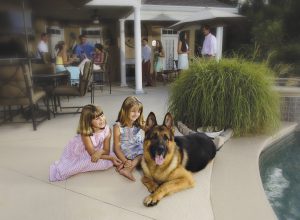 A Lover and a Fighter:
Harrison K-9s* Security Dogs are
Recognized World Wide as
The Top of the Line in Family Security!

Every so quietly a click of the latch and the sound of the sliding glass whispered in the quiet of the house-you’ve been targeted for home invasion. Then an explosion of barking and snapping teeth erupt in the night as your Harrison K-9* Executive Protection trained dog, launches a full out defense against the intruder who dares enter their domain. Home invasions are on the rise and these invaders are more vicious, crafty and skilled then the burglar of the old days. Just as technology has grown so has the ability of the average criminal. Luckily there is a device for you that can protect your home and family, play with the children, provide countless hours of companionship and, oh yeah-cant be bought, bribed, hacked into or stolen. A Harrison K-9®*! Harrison Prather, Founder and CEO of Harrison K-9* has been in the business of providing these outstanding K-9s to individuals and families all over the world for 42 years. His company trains the European German Shepherd in advanced obedience, Executive Personal Protection, tracking for lost children, and in-home search for intruders. Harrison, as he prefers his friends and clients to call him, imports these outstanding K-9 from Germany when they are around three years old. These German-bred dogs-which Harrison describes as the Thoroughbreds of the dog world-are judged on an International standard called Schutzhund, (Schutzhund literally means protection dog, in German) or the level of ability to which the dog can perform a series of demanding tasks with a handler directed by a certified judge.

This competition qualifies the dogs to a point, Harrison is careful to point out. He says, With our training methods we take out more of the Schutzhund protection than we leave in, we put a spin on the training that makes the dogs practical in the home not just on a competition field. He compares it to getting a job out of college: you might have the credentials necessary, but after you are hired, you still need training to meet the specific needs of your new employer. This is why, even after the Schutzhund training, these dogs head to his facility located in South Carolina-complete with practical threatening situations in cars, in the office, on backwoods paths, and in the home-and turns them into ever vigilant fighting machines. 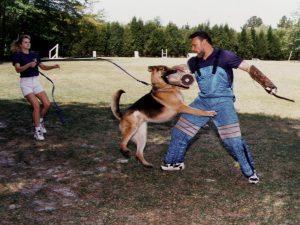 Training is intense and one example of Harrison K-9s* proprietary training methods is the Vigilant mode this is where the dog, once give the command sicher (secure in German) the dog will form a 360 degree three foot perimeter off-leash encircling the handler to protect him from any and all threats. This training is an example of some of the training Working K-9s went through in Vietnam protecting the soldiers back; and Harrison was exposed to while serving in the Army during the Vietnam war. When asked the validity of this training and how often he felt it was actually practical to use. He told us, Most people, in their private home, if the bad guy attacks them or their family are going to release the dog and allow him to do his job while they call the police or get their firearm. This training is designed for beyond the home, outside of the family’s natural element where sounds and people are different and you never know which one is the next threat to you and your family. The dog is quietly watchful and ever vigilant but in full control both on and off-leash.

Control is the foundation to describe the demeanor of a Harrison K-9*. In fact, these dogs are specifically trained to exhibit immense control that is regulated at the discretion of the handler. Discretion and control remain with the handler, not the dog, says the instructional video on their website, www.harrisonk9.com, even when teased, hit, and disturbed, the dog will not attack the assailant unless the handler directs. 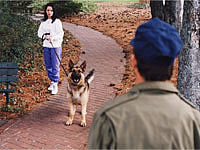 they don’t feel the need to display aggression to protect themselves. Harrison says. These dogs are not afraid of being hurt, nor do they fear dying, a dog of this level has no concept he can be defeated and does not feel he needs to prove himself with unnecessary aggression.

Furthermore, these dogs are not meant just to protect the family but also to be part of the family as a companion. While they can bark, bite and hold an intruder they can also be incredibly gentle. A quick glimpse at the web site shows children and babies hugging and leaning on panting dogs. You can tell the dogs crave attention, but you would never guess those teddy bear faces harbor a constant working mind on the lookout for the bad guy. Ninety percent of all of our dogs go into homes with small children and other animals. Harrison tells us, Gentleness is our top priority.

To cultivate these gentle tendencies, Harrison maintains a staff primarily of female trainers and handlers. The staff is trained from within the organization to assure everyone is training at the same level and quality. With female trainers on staff, Harrison is able to assure his clients that the dogs not only get a sense for their new owners and environments but that almost anyone, including children, can handle a Harrison K-9*. Harrison tells us, My typical client is a family where the man travels and the women and children stay at home, leaving the dog alone with the wife and children. We often run into resistance with the wife and mother of the children as they fear for their child’s safety. This is a legitimate concern and seeing the dogs work with female trainers that are mothers themselves is a big reassurance.

Each dog is tailored to the individual needs of the family, with no two dogs being trained exactly alike, including considerations that pertain to cooperation with other animals, comfort with travel, and activity level of the family. Harrison tells us, We are often asked what level of training is this dog. These dogs do not come in levels like a computer program, each dog has a foundation of training and then each dog is modified to fit the clients personal lifestyle and family. Just like families do not come in levels and are individual; each dog is individual as well. 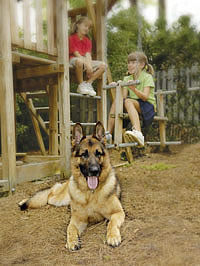 Aside from the dogs personality, their training can include locating the scent of missing children, and avoiding poisoned food. Harrison tells of a story about a client who, after setting up a night camera, found that during the course of one eight-hour period , while the family was asleep, the dog got up nineteen times and went around the house to inspect, then came back and laid down again in front of the children’s bedroom door. Nobody, no matter how much you pay them is going to give you the eyes and ears of a watchful Harrison K-9* German Shepherd, all the time 24/7 X 365 days a year. He says.

And this is what gives Harrison, who used to train K-9s for the U.S. Military and has been in this business for thirty-four years non-stop, his greatest satisfaction. There’s a lot of reward in knowing that you are doing some good, he says. My clients are looking for safe, reliable family security, and even though it comes with a price, the average dogs cost between $30,000.00 and $60,000.00 each. Harrison’s clients can see past the monetary cost to the value of peace of mind for their family and security for their home that goes above and beyond the call of duty. Ask yourself just how much is your family’s security worth. WWW.HARRISONK9.COM